That Time When the U.S. Became More Ridiculous than Hogan’s Heroes 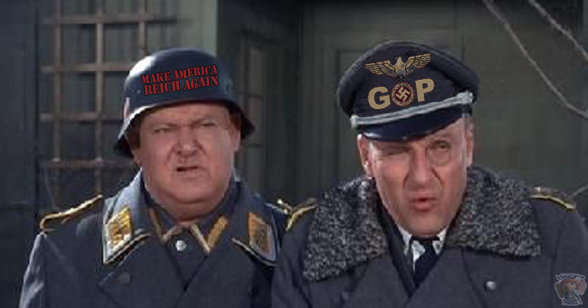 The other day, the monosyllabic Kansas trailer park Congressman chosen by trump to be his CIA stooge before being transferred into his job as our pretend Secretary of State got his dumb on.

He was shipped back to North Korea to try managing them as a bunch or “slant-eyed assets.” His aide explained to him what an “asset” was before he left, according to Pompeo’s twitter feed. It was apparent to readers that he was proud to use a new 2-syllable word.

Anyway, Pompeo knew he had to be on top of his game. He had a BIGLY handshake and a grand, oversized notecard-in-a-frame to hopefully sign.

Of course, Pompeo came across like the ignorant clown he is, and the North Koreans chided both him and trump as soon as he was out of Korean airspace.

And, that’s completely understandable. Sad, and angering to see any country — let alone North Korea — treating America like that. But, can they be blamed? I mean, while I ABHOR the Dick Cheney, I took some comfort knowing that when he was anywhere with anyone he inspired a good quivering. His counterparts around the globe knew there was some REAL fire in the room shooting from his demonic snout-holes.

Even the little Kim Jung Juniors that Pompeo was allowed to keep company with could recognize a turd in a punch bowl. They recognized trump’s envoy as the court jester he is after a casual glance at his comical mug. They saw clear as mom’s spring-cleaned windows that the trump Reich are their inferiors. They KNOW they consistently out-class, out-maneuver, and out-think all of them.

And, you know that China’s Intelligence is prepping Jong Un’s team. We are being represented by some real colonel Klink slapstick blitzkrieg morons. We’re out-classed by dregs of the world.

That makes US dreggier than the dregs

Until we rid the U.S. of trump and his entire Reich, we don’t stand a chance. God help us.

Magnana Mouse is a state of mind. Magnana Mouse is the Resistance. Citizen Media. World peace is a thing we will achieve person-to-person across the planet. Truth is like that. Person to person. Truth is a thing. It is all of our responsibility to foster it's regrowth. Primary source only has one higher. So to speak. Haleakala. #RESIST
View all posts by Magnana Mouse →
This entry was posted in Republican Darkness, Trump Illegitimacy, World Politics and tagged china, Colonel Klink, Dennis Rodman, Donald Trump, GOTV, Hogan's Heroes, Kim Jong Un, Mike Pompeo, North Korea, RESIST. Bookmark the permalink.